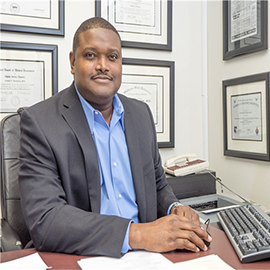 Following his graduation from Howard University College of Medicine he completed a joint residency training program at Michigan State University, Kalamazoo Centre for Medical Studies and at Howard University Hospital in Internal Medicine.

Dr. Richardson later served at Andrews Air Force Base with the 459th Aeromedical Staging Squadron, leading a unit that provided supportive and emergency medical care for war casualties, who were transiting the Air evacuation system during operations, Nobel Eagle, Enduring Freedom and Iraqi Freedom. He is currently Chief of Aerospace Medicine for the 459th Aerospace Medicine Squadron at Joint Base Andrews.

As a civilian, Dr. Richardson worked as an Internal/Medicine Critical Care Unit physician at Northwest Hospital Centre in Randallstown, M. D. from 2001 to 2011. He is also owner/President of Kingdom Medicine, P. A., Pikesville, MD, a private Primary Care/Internal Medicine practice. He is the current president of Monumental City Medical Society in Baltimore, Maryland, an affiliate of the National Medical Association. He is also the President and a founding member of the Maryland Physician’s Group.

Dr. Richardson is an accomplished athlete having won a bronze medal in the Decathlon at the Pan Am Games, and is the National Record holder for the 110m hurdles and Decathlon for St. Kitts and Nevis.